The Fiscal Cliff Resolution Could Give Solazyme A Boost - SynBioWatch

Note: This analysis from Seeking Alpha reveals what could be a significant step toward consolidating federal support for the bioeconomy:  The “American Taxpayer Relief Act of 2012” expands the definition of “cellulosic biofuel” for the purposes of the Cellulosic Biofuel Producers Tax Credit to explicitly include biofuels from microalgae and cyanobacteria. Additionally, the legislation replaces the phrase “cellulosic biofuel” with the broader “second generation biofuel” in recognition of this new definition. What this means is more federal subsidies for private research and genetic manipulation of microbes, in the interests of keeping the machine running… – synbiowatch

Recent years have not been kind to microalgal fuel producers and their investors. Investors in industry leader Solazyme (SZYM) have fared quite poorly since its IPO since 2011, as its shares have drastically underperformed the S&P 500 (see figure). While microalgal fuels have been under investigation [pdf] as a potential substitute for petroleum since 1978, interest didn’t truly boom until the petroleum price spike of 2008. And then boom it did, with annual private investment in the U.S. alone reaching the billions. Solazyme’s share price is indicate of how greatly interest has since waned, however, as independent researchers have estimated microalgal fuel production costs to exceed $240/bbl [pdf] due to extremely high capital costs and low product yields. According to another recent analysis, the minimum selling price for microalgal fuels ranges from $9-21/gal, depending on the process conditions employed. In the short-term, therefore, unsubsidized microalgal fuel production does not represent an economically-viable pathway. As the leading U.S. publicly-traded microalgae production company, Solazyme’s share price has fallen to less than half of its IPO price. 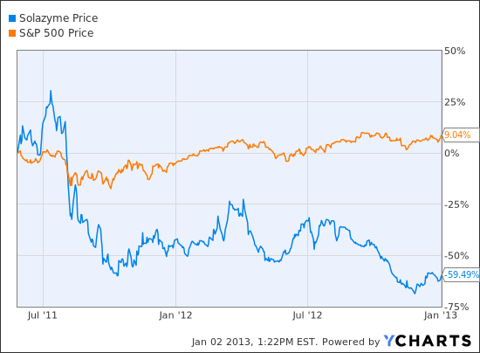 One consequence of this realization has been Solazyme’s expansion of its initial focus on biofuel production to include the higher-value specialized chemical and personal care product markets. The company’s goal is to remain financially viable by relying on high value, low volume products to achieve profits until microalgal fuels become competitive with petroleum, at which point it can expand production into the much larger transportation fuel market. (For a very detailed overview of Solazyme from a bullish perspective, see Kevin Quon’s numerous Seeking Alpha articles on the company.) Microalgal fuel’s production costs are too high at the moment to compete with petroleum, and the route to profitability will involve the extraction of sufficient value from each unit of microalgae grown.

The January 1 agreement to avert the “fiscal cliff” included provisions that have the potential to substantially affect microalgal fuel production. Despite immense popular interest in the pathway near the end of the last decade, microalgal fuels have largely been overlooked by Congressional policymakers. Whereas corn ethanol and soy biodiesel producers have received billions of taxpayer dollars in subsidies from the federal government over the last decade, microalgal fuels have largely been ignored by tax credits and the Renewable Fuel Standard (RFS) mandate. The “American Taxpayer Relief Act of 2012” remedies this longstanding oversight by expanding the definition of “cellulosic biofuel” for the purposes of the Cellulosic Biofuel Producers Tax Credit to explicitly include biofuels from microalgae and cyanobacteria. Additionally, the legislation replaces the phrase “cellulosic biofuel” with the broader “second generation biofuel” in recognition of this new definition.

At first glance this is an inconsequential modification. The cellulosic biofuel credit has had little impact on the cellulosic biofuels industry, in part due to the fuels’ high production costs and in part due to the credit’s low value to qualifying producers (as a non-refundable tax credit, it only provided value to cellulosic biofuel producers with taxable income, which the industry has yet to achieve in any demonstrable quantity). The new “Second Generation Biofuel Producers Tax Credit” is expected to have a similarly small effect, with an estimated taxpayer cost of $59 million over the next decade.

The legislation also brings back the biodiesel and renewable diesel tax credit that had expired at the end of 2011. This credit is a refundable tax credit worth $1/gal of qualifying biofuel blended with or used as transportation fuel, making it far more valuable than the cellulosic biofuel credit since the former is a direct monetary transfer from the IRS to the producer, regardless of taxable income (or lack thereof). Microalgal lipids can be converted to both biodiesel (via transesterification) and renewable diesel (via hydroprocessing), so the biodiesel and renewable diesel credit is the more attractive option of the two. It was unable to boost microalgal fuel producers to profitability prior to its expiration in 2011, however, so qualifying for the second generation biofuels credit as well is unlikely to make any difference in this regard for producers of microalgal fuels.

A more thorough look at the industry suggests that the fiscal cliff legislation could still have a positive impact on microalgal fuel producers when a longer-term view is taken. As mentioned earlier, a major challenge facing producers such as Solazyme is low product yields. Both biodiesel and renewable diesel utilize lipids as feedstock, and the lipids content of most microalgae strains is quite low (3-38 wt%). In other words, more than 2/3 of the microalgae crop produced for biofuel feedstock isn’t currently utilized as such; most of it is a waste product. While these protein-rich microalgal remnants that remain after lipids extraction have been proposed as an alternative cattle feed (similar to DDGSs in the corn ethanol industry), the remnants’ high nitrogen content presents a major hurdle to their utilization as such. Recent research has found that the microalgal remnants can serve as a biofuel feedstock, however, with 57% of the remnants’ energy content being converted into a raw biofuel. The carbohydrate content of many microalgae strains is also higher than their lipids content, making the remnants a possible feedstock for fuel ethanol production as well. Until now, biofuels produced from microalgal remnants, which comprise the vast majority of most strains’ mass, haven’t been considered qualifying biofuels by Congress. While the financial value provided to producers by the new second generation biofuel credit is still quite low, it represents a first step by the U.S. government to subsidize biofuel production from the entire microalgae crop, rather than just the lipids fraction.

A shift toward feedstock parity?

U.S. political behavior can be very difficult to predict, particularly in today’s highly partisan environment. A previous proposal to revive and expand the cellulosic biofuel credit to include microalgal fuels was rejected by Congress back in March 2012, and it is possible that microalgal fuel’s boosters in Congress have achieved their full goals with their January 1 victory. Alternatively, however, this recent shift in government policy could signal a broader movement among policymakers to introduce microalgal fuels into larger policy initiatives in a similar manner – namely, the revised Renewable Fuel Standard (RFS2). While the impact of the old cellulosic biofuel credit was marginal, the cellulosic biofuels category of the RFS2 mandate remains the holy grail of U.S. biofuels policy: incredibly valuable and yet consistently out of reach. While RIN values for the biomass-based diesel category of the RFS2 (which encompasses both biodiesel and renewable diesel) have collapsed since 2011 in the wake of increased production and allegation of widespread RIN fraud, cellulosic biofuel RIN values remain unknown due to the complete failure of the mandate for that category to date. Furthermore, the mandated volumes of cellulosic biofuels far exceed those of the biomass-based diesel category in future years; given their larger mandated volumes and lower current production volumes, RIN values for cellulosic biofuels can be expected to be much higher than for biomass-based diesel in the long-term. An expansion of the cellulosic biofuels category of the RFS2 to include biofuels derived from microalgal remnants would therefore greatly enhance the economic feasibility of microalgal fuel producers by providing them with both a large market and a large subsidy for utilizing the full microalgae crop for biofuel production.

The American Taxpayer Relief Act of 2012, which was passed by Congress on January 1 to avert the fiscal cliff, restores the expired $1/gal refundable tax credit for biodiesel and renewable diesel production. It also expands both the name and the definition of the Cellulosic Biofuel Producer Tax Credit to include biofuels produced from microalgae. While the initial impact of the legislation on producers of microalgal products such as Solazyme will not be sufficient to make microalgal fuel production economically feasible, it does represent a substantial shift in U.S. biofuels policy. By expanding the definition of the cellulosic biofuel credit to include fuels derived from microalgae, Congress has incentivized the utilization of the full microalgae crop as biofuel feedstock, rather than just its relatively low lipid content. This policy shift could represent the first step in a move to establish regulatory parity between microalgae and lignocellulose feedstocks for the purposes of the RFS2 as well as federal tax credits. Complete regulatory parity between the two feedstocks would permit microalgal fuel producers to receive a major new source of financial support from the U.S. government in the form of the RFS2’s cellulosic biofuel category. This latter scenario is very uncertain due to the current political environment in Washington DC, although it is far more likely than before the fiscal cliff legislation was passed. Solazyme, as a market leader in the microalgae industry, is well positioned to benefit from complete regulatory parity between microalgae and lignocellulose should it be attained.