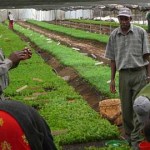 by Jim Thomas Originally published by the Guardian UK Artemisinin breakthrough by synthetic biologists threatens to open new front in battle between microbes and people   In the constant fight between microbes and people, attempts to rein in the malarial parasite have just taken an interesting turn. On Thursday April 11 the founder of Amyris Biotech triumphantly announced production of 70m doses of the anti-malarial compound artemisinin. This sounds like good news for poor people but may be [More]

by Jeff Conant, for synbiowatch Last week, the Supreme Court heard testimonies in the Bowman vs. Monsanto case, wherein the agribusiness giant is fighting an appeal by farmer Vernon Bowman, who the company claims infringed its patent rights by replanting seeds he purchased beyond the bounds of the company’s licensing agreement. The farmer’s claim is that seeds are seeds, designed by nature to reproduce, and that therefore farmers have the right to plant them as [More] The NY Times ran this article a few days ago, about the pending release of a desktop nano-biotech design program. The reporter mentions that “there are still many open questions that nanotechnology needs to surmount, ranging from viability to safety,” but lapses quickly into a swoon over the inventors’ hyping of the new technology, saying  that “they can recreate the thriving commercial ecosystems that the company has now evolved in engineering design at a Lilliputian scale.” [More]

Twelve years ago, a biotech conference in San Diego drew thousands of protesters, during a peak of activity challenging corporate patents on life and the cynical smokescreen of pro-poor policies and ‘feeding the world.’ Now, as global trade regimes have further concentrated and biotech has consolidated its role as a keystone industry not just in the food and big pharma sectors, but also in the energy sector, another biotech conference in the same city should [More]

By Rachel Smolker, cross-posted from Huffington Post In his inaugural address, President Obama spoke eloquently about his intent to address climate change, saying: “We will respond to the threat of climate change, knowing that the failure to do so would betray our children and future generations.” Following on, the right-wing deniers predictably flew into a frenzy of obnoxious blather, largely serving to clog up the media. Meanwhile the liberals, progressives and enviros cheered with glee, as [More]

By Associated Press, cross-posted from Washington Post HAGERSTOWN, Md. — At least 11 workers at U.S. biological laboratories were infected with dangerous pathogens from 2004 to 2010, the federal Centers for Disease Control and Prevention said Tuesday in a report on security measures stemming from the deadly 2001 anthrax attacks. None of the infected workers died. The Atlanta-based agency said the infection rate of 1.6 per 10,000 workers was far lower than the rate of general [More] Note: This analysis from Seeking Alpha reveals what could be a significant step toward consolidating federal support for the bioeconomy:  The “American Taxpayer Relief Act of 2012” expands the definition of “cellulosic biofuel” for the purposes of the Cellulosic Biofuel Producers Tax Credit to explicitly include biofuels from microalgae and cyanobacteria. Additionally, the legislation replaces the phrase “cellulosic biofuel” with the broader “second generation biofuel” in recognition of this new definition. What this means is [More]

Note: Microbiologist Becky McClain, infected by a genetically engineered virus in a Pfizer lab, became the first whistleblower in the nation to try to shed light on the threats of biotechnology to workers and the public. Now, the U.S. Second Circuit Court of Appeals in New York, has validated her claims that Pfizer “acted willfully, maliciously, or with reckless indifference” concerning allegations that her free-speech rights had been violated and she had faced retaliation for [More]