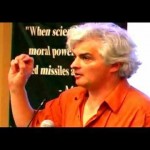 A Risky Development: The University of California, Lawrence Berkeley National Lab, and the US Department of Energy have unveiled plans to build a high profile biotech laboratory in the East Bay. The lab and associated commercial activity will focus on developing biofuels and other products using synthetic biology: an extreme form of genetic engineering that creates artificial life. Ground Zero for Syn Bio: Already a multi-billion dollar field, synthetic biology is fast becoming the next [More]